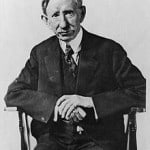 Frank G. Carpenter, journalist, author, photographer, and world traveler, was born in Mansfield, Ohio in 1855. Following his graduation from the University of Wooster in Ohio in 1877, Carpenter began working for the Cleveland Leader and in 1882 he became the Washington, D.C. correspondent for that newspaper and had a regular column entitled “Carp’s Washington.”

He also wrote for the American Press Association and the New York World. In 1888 and 1889 he financed a trip around the world with his “travel letters” submitted to Cosmopolitan Magazine and twelve syndicated publications.

In 1883 Carpenter married Joanna Condict and they had two children. The family resided in the Washington, D.C. area. After her graduation from Smith College, their daughter Frances Carpenter accompanied her father, as his secretary and photographer, in his travels which continued throughout his career.

Frank Carpenter was a fellow of the National Geographic Society and published many articles and books on geography, some co-authored with Frances Carpenter. Together they also compiled an impressive collection of over 15,000 images (later donated by France Carpenter to the Library of Congress).

Frank Carpenter died in 1924 in Nanking, China, during his third trip around the world.