A conversation with the American novelist Jonathan Franzen
Skip to content 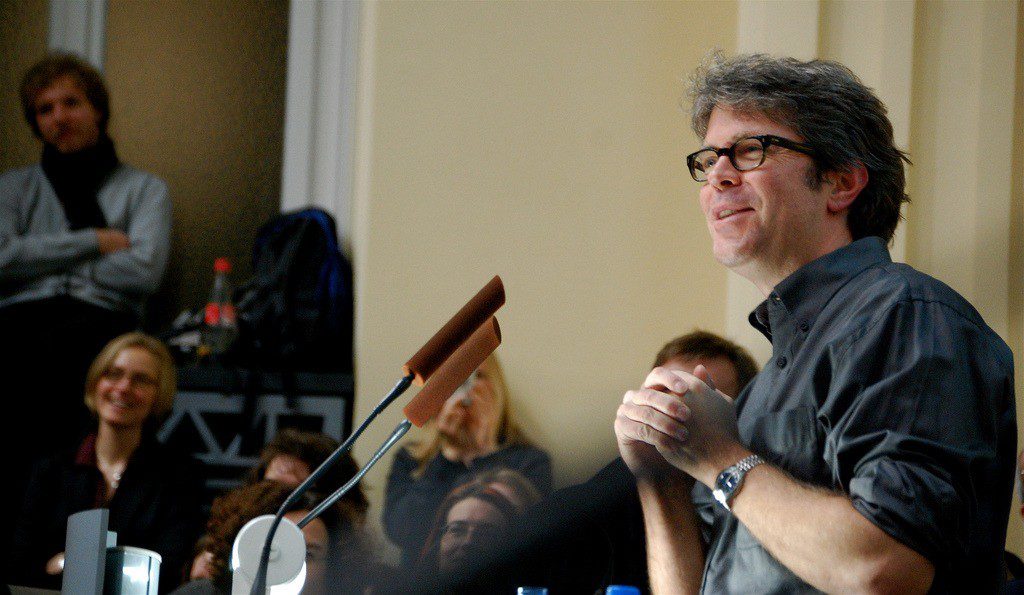 The buzz surrounding American author Jonathan Franzen is not all in day’s work for most writers, especially on this scale. The release of his fourth novel, “Freedom,” in August 2010 (translated and published in Greek by Oceanida) was closely followed by a cover in Time magazine which hailed him as a “new Tolstoy” and a “great American novelist.” In fact, US President Barack Obama was among the first to read and convey his appreciation for the novel, which went on to climb to top several best-seller lists.

In “Freedom,” like in “Corrections,” Jonathan Franzen dives into the complex microcosm of family relationships to approach social and political issues of this millennium and to paint, in the words of Time magazine, “an indelible portrait of our times.”

Focused on the family life of Patty and Walter Berglund, “Freedom” is an epic tale of love, marriage and temptation, the obligations of freedom, life in American suburbia and in the years of the Iraq war.

A pleasant surprise for Greek readers is the character of actor Dinos Iliopoulos as we remember him from the film “O Drakos” (The Dragon or The Fiend of Athens) by acclaimed Greek director Nikos Koundouros. He haunts “Freedom” like the mirror image of the novel’s protagonist, Walter Burglund.

How did you come to know about the Greek film “The Fiend of Athens”?

I saw the film in 1979 at the Chicago Art Institute, where one of my brothers was working as a projectionist for a foreign-film series. It made a strong impression on me, in part because, although I love movies, I don’t see that many of them. “O Drakos,” as I think it’s called in Greek, was a model for the kind of work I wanted to do myself: ridiculous and deadly serious at the same time. And since I had in mind that Walter would become a kind of unwilling outlaw hero, it was natural to imagine that he and Patty had seen the film when they were students.

Family is a central theme in your literature. “Freedom” heightened my feeling that family is often a source of pain and violence. It seems ironic, because in the Western world, family is seen as a certificate of regularity. Why is this model so often dysfunctional?

How I hate the word “dysfunctional”! A dysfunctional family is one where the mother is too strung out on drugs to feed the kids, and the stepfather is having sex with the eleven-year-old daughter. The families I write about are merely unhappy, which is to say that they are interesting in a way that happy families are not. Unhappiness implies the presence of unresolved conflicts, and conflicts open the possibility of drama, and drama is the storyteller’s friend.

Do you think that something is changing or must change in the paradigm of the “perfect”?

There have been many changes in family life between now and when I was growing up, and one of the things I wanted to do in “Freedom” was to look for meaning in some of these changes – to chart the progress of Patty and Walter Berglund from their childhood to their years of parenting, to compare and contrast. No less interesting, though, is the ways in which families never change, because literature has always interested itself in the primal, fixed elements of human life. It’s why we can still enjoy “Medea,” and why I can appreciate a contemporary family story set in a Japan or Namibia. We’ll always have parents and children and siblings, even if the relationships become virtual, rather than genetic. To write about them is to have a chance to connect with people very unlike myself.

America, in your book, is at once a fascinating and terrible country. We get the impression that there is a deep obsession with respect for civil liberties and individual rights, perhaps more than any other country in the world. However, this respect for freedom and social justice does not seem to cure society of hypocrisy, hatred, violence, and prejudice. How do you explain this? Is there a thread that joins the social and political context with the structure of the typical American family?

Well, yes, since you mention it. The traits of particular national cultures do bear some resemblance to the traits of particular families. Every country is different, every country begins with certain strengths and certain weaknesses, and, just as in a family, these strengths and weaknesses interact with each other in interesting ways – changing with each generation while also staying fundamentally the same. The American obsession with freedom is both a great strength and a deplorable weakness.

A somewhat taboo theme that recurs throughout your book is that of overpopulation. Walter says that we humans are “a cancer on the planet” because, according to him, overpopulation leads to an increase in poverty, crime, and war in the whole world. What is the significance of this aspect in your story?

Since childbearing and child-rearing plays such an important role in the book, I wanted to acknowledge – and have some fun with – the fact that having children has taken on a new kind of significance as the world has become more and more overpopulated. A more general project of mine, as a novelist, is to try to pay attention to issues and phenomena that society is ignoring. I’m interested in investigating precisely the things that people, and countries, would prefer not to think about. And the environmental devastation wrought by overpopulation is certainly one of these things. The psychological consequences of the too-close friendship between parents and children are another. As a novelist, I don’t want to chase after what we already know about ourselves. I want to dig down through the repression and get at the hot and underexplored issues underneath it.

Joey, Walter’s son, is a young Republican making fast money on dubious contracts in the war in Iraq. Joey’s attitude in the book seems to summarize the opinion that many people around the world have for the USA as a whole: that it does not care about the democratization of the countries that it invades and its only purpose is to financially exploit the poor. Do you think that the Obama administration has managed to alter this perception?

Living in America, I’m the wrong person to ask whether Obama has changed other countries’ opinion of us. I would certainly hope so – I think he’s the best president of my lifetime – but I don’t actually know. I do think there’s some truth to the idea that the American public would prefer to remain in childlike ignorance of the bad motives of its government, especially the government of George W. Bush. But I also think that every country has its blind spots, and I get annoyed when America is portrayed as being worse than other countries. Even under Bush, not everything the government did was cynical. Indeed, it’s been interesting to see, in the Middle East in the last few weeks, how potent Bush’s doctrine of freedom and democracy continues to be.

A harsh criticism of the technological revolution also emerges in your story. Do you believe that the promise of freedom (as provided, for example, by social networking etc.) is fictitious?

It’s certainly fictitious to the extent that “freedom” is construed as “freedom to choose your own gadgets.” Most of the people I know feel more enslaved by their gadgets than liberated by them. The American media, of course, have been trumpeting the importance of social networks to the recent uprising in the Middle East, and it is indeed noteworthy that one of the Chinese government’s main instruments of repression is to restrict access to the internet. So the new technology has probably led to some increase in people’s powers of self-determination. But the technology comes with so many negatives, personal and social and cultural, that I’m not sure its net effect on the human race is positive.

“Freedom” takes a very interesting point of view on the “craze” of environmental protection. Even though saving the plant is surely important, environmental campaigns are generally viewed with some suspicion. The same skepticism exists over the actions of celebrities like, for example, Bono, who are seen by some as using activism to give them more power and influence. Are you optimistic that people will understand just how important the protection of the environment truly is or does this part of the book have a totally different meaning?

I’m not an optimist, no. But I still want to do what I can to save some of the planet – wild birds in particular – from annihilation. The alternative is simply to despair, and to spend your life passively contributing to the problem. And although it’s true that environmentalists are seeking their own kind of power or are forced to cooperate with those who are, this could be said of any kind of activism, right?

A very touching part of “Freedom” is, in my opinion, the exploration of love and affection. It seems to me that the only thing worth fighting for in life is love – certainly not an easy battle. Why do you think it is so hard for many people to open themselves up to love?

I think love is easy; it’s marriage that is hard. And the cultural and political and commercial celebration of “freedom” only makes it harder. Sooner or later, you’re forced to confront the fact that freedom consists not in having unlimited choices but in making the right choices. And life is a process of discovering what the right choices are.

Your fascination with bird-watching is common knowledge. Is it like some form of meditation?

No, it’s an expression of my love of wild birds. It brings me joy to see them still surviving against the odds, and they are endlessly beautiful and interesting. I’m not sure it’s accurate to say that birds were a choice I made – it felt more like they were choosing me – but, having made this choice, I will now always have something to look forward to, and something to fight for.

How have you handled the overwhelming publicity that followed the publication of “Freedom”? I am thinking about the incident in England when a guy stole your glasses.

I handle it by ignoring it. I don’t read the press about myself, don’t read reviews of my work, never Google myself. I trust people to respect my privacy, and they almost always do. Obviously, I couldn’t ignore the glasses incident, but I was able to see the perpetrator in human terms (he was just a student who’d drunk too much) and to remember the pranking that I myself had done when I was his age. Which is say that I just laughed it off. I’m also very fortunate to live with a woman who doesn’t take me too seriously.

Do you accept the title of “Great American Novelist” assigned to you by critics?

I dislike the phrase “Great American Novel” – I’ve never understood what it means. But, yes, to answer your question, I decided some years ago that I cared so much about the novel, as a form, that I was willing to try to be a public spokesman for it and to accept any unpleasant consequences that came with this. And, of course, the consequences are not all unpleasant.