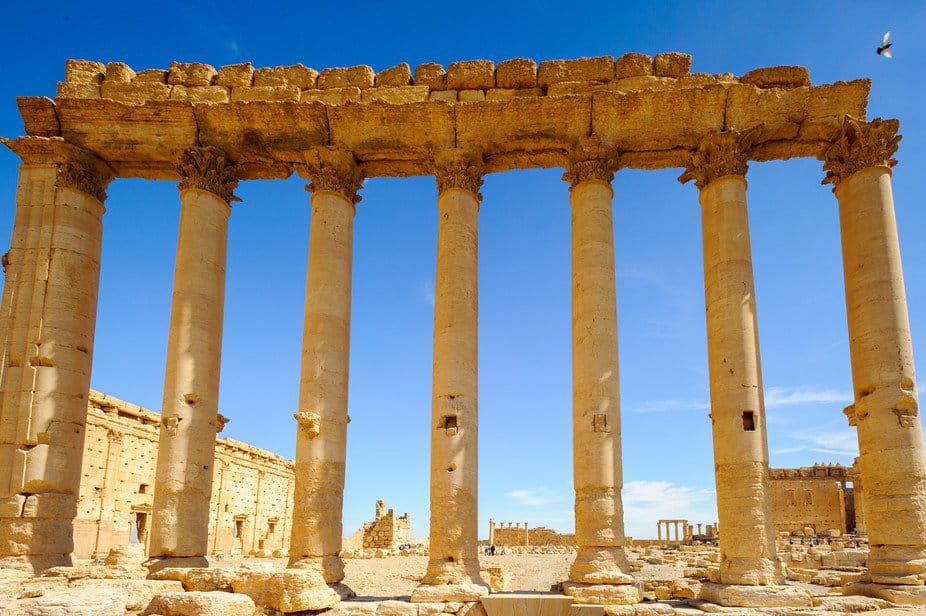 When British politicians such as Boris Johnson start urging archaeologists to
return to rebuild Palmyra, they are guilty of staggering naïvety at best, and rank hypocrisy at worst. Aside from the fact that no British archaeologists were active in Palmyra before the war, it is rarely mentioned that members of IS were observed by satellites moving across the desert towards Palmyra last spring. And nothing was done.

Anyone who has visited the city will know that it sits in the middle of the Syrian desert, the roads leading to it running through an open landscape of scrubby, sandy land broken only by the odd thorny bush or isolated hut. Any convoy will have been easily visible from above and, since Palmyra is several hours away from both Raqqa and Deir ez Zor, there would have been ample time to call in air strikes to at least severely disrupt the progress of the IS advance.

The fact that this did not happen, especially given the international outcry when the archaeological site fell into Jihadist hands shortly afterwards, now seems inexplicable.

So what was really going on? And could Palmyra have been saved? The answer is: yes, it could have been spared this destruction, but sadly there was no political will to do so. An intervention by the US and her allies would have helped the forces of Syrian president, Bashar al-Assad, hold the city from IS, but would have meant aiding the Syrian government – a situation deemed too politically unpalatable to contemplate even if it meant risking the very existence of a UNESCO World Heritage site.

It isn’t clear whether the Syrian army really was overwhelmed by IS or whether their failure to protect Palmyra was politically calculated by the Assad regime. When Palmyra fell, after all, the Syrian government was able to use the capture of the city by IS to highlight the brutality and nihilism of the jihadis and argue that theirs was the more palatable form of rule.

In any case, the fall of the fabled city enabled the Syrian regime and their allies the Russians to argue that only they were really fighting terrorism, providing a pretext for Russia to send planes and other military hardware to assist Damascus. It is also clear that Palmyra could have been retaken far more quickly had there been the political will to do so in Damascus and Moscow.

Indeed, reports from agencies such as the Syrian Observatory for Human Rights have highlighted the fact that a concerted air campaign was waged in the west of the country in Aleppo and Idlib provinces, areas with the largest number of moderate Syrian fighters and secular activists trying to build a civil society. It was only when these areas were on the verge of collapse that attention was turned to the IS presence in Palmyra.

It is now painfully clear that the West has been comprehensively outflanked in propaganda terms by the Syrian regime and her Russian friends. Not only can Assad argue that it was his men who fought and died attempting to save the city, but the story has a new “glorious” chapter in which the valiant Syrian army, supported by Russian air power, has managed to vanquish the evil jihadis and regain this unique and iconic symbol of Syria. It has all worked out rather well for President Assad.

And the West? Well, for all the weeping and wailing over Palmyra,
the bottom line is that a UNESCO listing means absolutely nothing. UNESCO is an empty vessel and we should ask serious questions about what such an enormous, unwieldy and prohibitively expensive organisation actually achieves in real terms. Governments pay lip service to issues of international culture, but they condemn destruction of cultural heritage largely because the people who destroy the monuments are always groups who are considered enemies for other reasons. Iconoclasts are generally fanatics in all areas of life.

Funding cultural heritage schemes always looks good. However, that cultural heritage is ultimately disposable when it comes to a tricky political situation. Last year, there was a clear choice. Those IS trucks could have been stopped. The Temples of Bel and Baalshamin, the Triumphal Arch, the Tomb Towers and the
lives of many inhabitants of Palmyra, including its most famous resident Khaled al-Asaad, could have been saved. But that would have meant “helping” the Assad regime.

And the new offers to help rebuild the city? Who will they actually help? Ultimately, only Assad and the Russians will benefit from this situation. Whatever the promises of money and technology, Palmyra will never again be the same and the world should wait until peace is restored in Syria before we even begin to contemplate the best way forward for the city and her inhabitants.