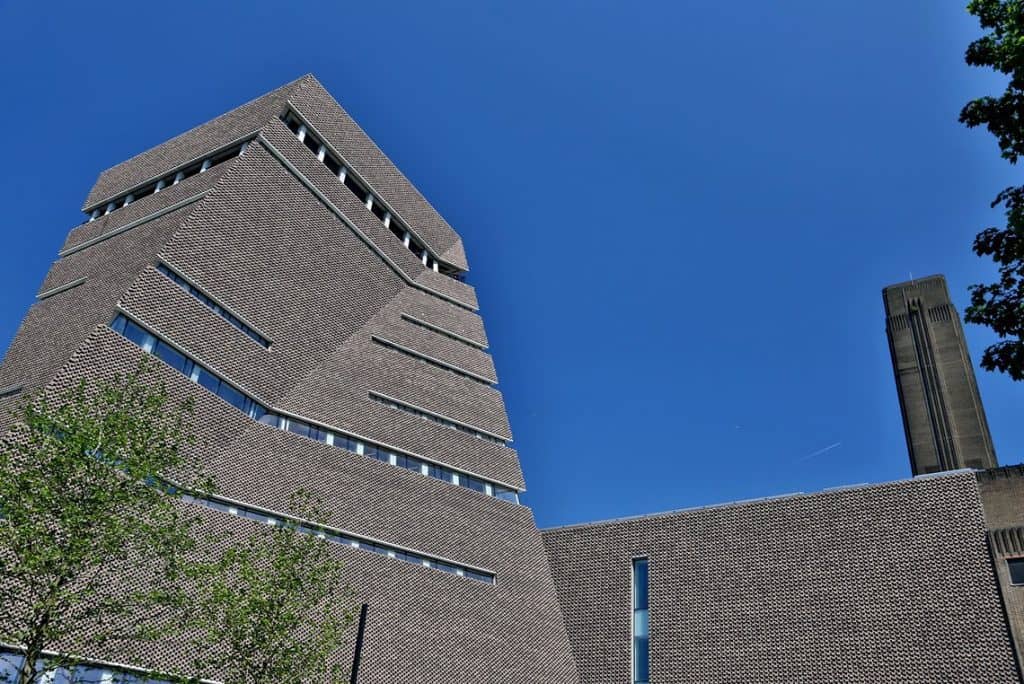 The Switch House feels like it belongs. The twisted, off-kilter pyramid of Tate Modern’s new extension is terrific not only on its own terms, but also in its impact on the rest of Herzog & de Meuron’s original conversion of Bankside power station into contemporary art gallery in 2000.

Fifteen years, dozens of major exhibitions, several rehangs and four directors later, all those suns, slides, cracks, sunflower seeds and other weird encounters in the Turbine Hall have made Tate Modern more popular than anyone – including Tate – could have imagined. While the hope, often expressed, that the Switch House might siphon off some of the main gallery overcrowding may be an illusion, the way we encounter and look at art has changed, and there is an effort here to encourage as well as accommodate live art, the ephemeral and the temporary; art that is as much about people as the things they make.

Beneath the Switch House, in a space formerly occupied by the power station’s oil tanks, five performers are acting out famous artworks, without using any props. A lone woman does the Mona Lisa, with a constipated look and a weak smile. Everyone lies on the floor as Shibboleth, the crevice Doris Salcedo dug into the floor of the Turbine Hall in 2007. Standing together and uttering sonorous moans, they become a living, singing simulacra of Mark Rothko’s Seagram Murals, one of the highlights of Tate Modern’s collection – except they aren’t fuzzy and they are not purple. You need to use your imagination.

Alexandra Pirici and Manuel Pelmuş’s performance, both homage and parody, is one of several live events taking place around Tate Modern following the Switch House opening. In the tanks, performance sidles around sculpture that also invites audience participation. Soundworks, immersive installations and multiscreen videos eat up whole rooms and even suites of galleries. Being flexible with its collection is as important for Tate Modern as mounting blockbusters (up next in July, Georgia O’Keeffe), thematic shows and retrospectives. Curators now have a chance to recombine better-known works with newer acquisitions, and in doing so escape the axis of Europe and North America that has dominated Tate’s holdings until recently.

Climbing through the first four storeys of the Switch House, there is pleasure and surprise in its long, broad staircases, with their unexpected windows and sudden views of floors above (echoing Herzog and de Meuron’s Schaulager museum in Basel). All that angled and slanting concrete also reminds me, at times, of Ken Adam’s film architecture for the Bond movies and Doctor Strangelove’s war room. You feel air above you and the world beyond, and also a sense of occasion. Above several floors of administration, the space is topped by the 360-degree outdoor viewing gallery at the building’s apex. This alone will attract visitors, whether or not they continue to the galleries.

Complementing the grand void of the Turbine Hall, the tanks and intermediary spaces in the Switch House give visitors mental as well as physical respite. But it is all very well to say how lovely and open level two of the Switch House feels, how great the alignment of works. What price curatorial sensitivity when the galleries fill up with people?

Related: Tate Modern’s Frances Morris: ‘If it rained I went to the museum. That had a huge impact’

Art has to be approachable, as well as visible. With their high ceilings and even, fluorescent strip-lighting, these spaces have an air of the factory or the studio. Lines on the floor indicate that you shouldn’t get too close to Carl Andre’s bricks, or to Roni Horn’s pink glass block, glowing in the light through a window. But you can take a Félix González-Torres poster from the stack nearby and walk through the enclosed, hanging labyrinth of Cristina Iglesias’s Pavilion Suspended in a Room.

The high point of the installations on show, these two rooms provide an uninterrupted journey in and out of art since minimalism; art that loses its purity in favour of its connection with real things and bodies. The jumble of Marisa Merz’s intestinal air-con tubing dangles over Rasheed Araeen’s precarious little open rhomboids. Lynda Benglis’s polyurethane goo slumps mysteriously in the corner beside Bruce Nauman’s frightening long corridor, too narrow for anyone to enter. David Medalla’s sculpture dribbles gouts of detergent foam in to the gallery. Your brain fizzes with it. There are real conversations going on here – the deadly serious and the playful not just co-existing, but enlivening one another as you move around.

The third floor – slightly lower ceiling, spotlights – is given over to “performer and participant”. There are the clothing, headdresses and weird body accoutrements used by the German artist Rebecca Horn (with a feel of the reliquary), and the alarming selection of items Marina Abramović invited people to use on her – should they so wish – during a performance in 1974. Choose your weapon: whip, axe, bunch of grapes, gun, chains, loaf of bread, apple. Do what you will. The real surprises here are the sculptures of Ana Lupas, strange metal objects that encase straw wreaths woven by villagers in Transylvania.

There is also Charles Atlas’s multichannel film of the elderly choreographer Merce Cunningham’s knees and elbows, hands and feet, showing how dinged up a dancer gets over the years. Or maybe he just got bruised fighting his way through the galleries trying to get a good look at the art. Lupas’s sculpture and Atlas’s film are a record and a transformation of bodies and material gestures into something new and unexpected. Some art needs intimacy.

Although the size of the Switch House galleries diminishes as you climb upward, there is enough variety in the kinds of work on show to make the scale of the exhibition spaces feel right. Space finally opens up again when you reach the fourth floor and walk into a room dominated by two huge canvases, by Julie Mehretu and Matthew Bradford, both recalling teeming cities. Elsewhere, macaws clamber round a large cage in Hélio Oiticica’s Tropicalia, among a system of ramshackle favela shelters on a sand floor. We are in a room in a city, thinking of other rooms, other places.

Curators work with ideas as much as objects, developing thoughts through their conjunction and alignment of works. This is a matter of theatre and choreography, as well as art history. As onlookers, we invent our own narratives, take our own soundings and find our own sightlines. Variety is key – the museum must cater for all kinds of audiences and readings. In the Switch House, the building is as much a player as the art.