Story of cities #13: Barcelona's unloved planner invents science of 'urbanisation - karouzo- a place for the arts
Skip to content 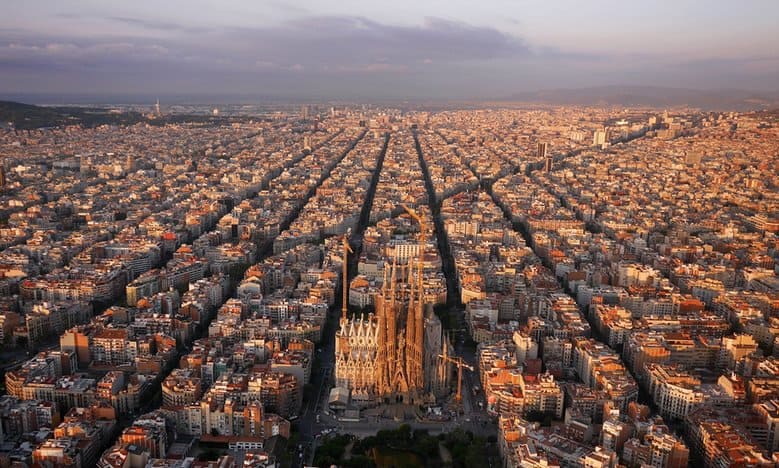 In the mid-1850s, Barcelona was on the brink of collapse. An industrial city with a busy port, it had grown increasingly dense throughout the industrial revolution, mostly spearheaded by the huge development of the textile sector.

The city was living at a faster pace than the rest of Spain, and was ready to become a European capital. Yet its population of 187,000 still lived in a tiny area, confined by its medieval walls.

With a density of 856 inhabitants per hectare (Paris had fewer than 400 at the time), the rising mortality rates were higher than those in Paris and London; life expectancy had dropped to 36 years for the rich and just 23 years for the working classes. The walls were becoming a health risk, almost literally suffocating the people of Barcelona – who were addressed directly in the following public statement of 1843:

Demolition work would finally start a year later. Now the city and the Spanish government had to design and manage the sudden redistribution of an overflowing population. It was a controversial and highly political decision – which ultimately led to the then unknown Catalan engineer Ildefons Cerdà’s radical expansion plan for a large, grid-like district outside the old walls, called Eixample (literally, “expansion”). In the process, Cerdà also invented the word, and study of, “urbanisation”.

By the early 19th century, the old walled city of Barcelona had become so crammed that the working classes, bourgeois society and factories all co-existed in the same space. “Everyone was suffering the consequences of an Asian-level density,” says the writer and essayist Lluís Permanyer, whose book Eixample: 150 Years of History chronicles that period.

As there was no more land left inside the city walls, all kinds of inventions were used to build more lodgings – houses were literally being created on empty space. Arches were erected in the middle of streets to be built upon, and a technique called retreating façades saw house fronts extended out into the street as they rose up – until they almost touched the building opposite (this practice was banned in 1770, as it prevented air circulation).

Traffic – in those days, horse-drawn carts – was problematic too: the city’s narrowest street (now gone) was just 1.10 metres wide, while around 200 were less than three metres across. This, combined with residents’ Mediterranean way of life (which meant being on the street whenever it was light – and in the case of some artisanal professionals, working there too), worsened an already severe lack of hygiene in the city.

Barcelona’s epidemics were devastating: each time they broke out, 3% of the population died, according to Montserrat Pallarès-Barberà, geography and urbanism professor at Universitat Autònoma de Barcelona. Cholera alone killed more than 13,000 people between 1834 and 1865.

Into this came Cerdà. His plan consisted of a grid of streets that would unite the old city with seven peripheral villages (which later became integral Barcelona neighbourhoods such as Gràcia and Sarrià). The united area was almost four times the size of the old city (which was around 2 sq km) and would come to be known as Eixample.

This unknown engineer was revolutionary in what he envisioned – but also in how he got there. Cerdà decided to avoid repeating past errors by undertaking a comprehensive study of how the working classes lived in the old city. “He had thought he would find all these urbanism books, but there were none,” Permanyer says. So he was forced to do it himself.

Cerdà’s eye was as careful as it is fascinating. His was the first meticulous scientific study both of what a modern city was, and what it could aspire to be – not only as an efficient cohabiting space, but as a source of wellbeing (not a straightforward concept back then).

He calculated the volume of atmospheric air one person needed to breathe correctly. He detailed professions the population might do, and mapped the services they might need, such as marketplaces, schools and hospitals. He concluded that, among other things, the narrower the city’s streets, the more deaths occurred.

Cerdà’s was the first meticulous scientific study both of what a modern city was, and what it could aspire to be

In short, Cerdà invented “urbanisation” – a word (and discipline) that didn’t exist in Spanish or Catalan, nor English or French, and which he codified in his General Theory of Urbanisation in 1867. His work is still studied in Catalan schools to this day. “The high mortality rates of the working class population, and poor health and education conditions, pushed Cerdà to design a new type of urban planning,” wrote Pallarès-Barberà in a recent paper about the district.

Gardens in the centre of each street block; rich and poor accessing the same services; and smooth-flowing traffic were among his then revolutionary, even utopian-sounding ideas – many of which materialised to at least some extent (although not the central gardens).

Eixample remains a prominent part of Barcelona’s image today: the octagonal blocks, chamfered in the corners, were his unique idea to deal with traffic, allowing drivers to see more easily what was happening to the left and right. Cars hadn’t even been invented yet – but when Cerdà discovered railways: “He realised there would be some sort of small machines moved by steam that each driver could stop in front of their house,” Permanyer explains. Even today, this design makes traffic circulation infinitely easier in Eixample.

And yet, none of these ideas were well-received or appreciated in Barcelona at the time. In fact, when the council originally opened a public competition for the extension plan in 1859, it had awarded it to its chief architect, Antoni Rovira. But in an unexpected intervention, the Spanish government stepped in and, via the creation of a new ministry of public works (which suddenly ruled over city councils), imposed Cerdà in a sign of historical – and future – tensions between Spain’s central and Catalan administrations.

This would forever taint Cerdà’s legacy in the city. A well-travelled but little-known engineer when he began his career-defining project, he was immediately mistrusted by Barcelona’s architects, who were in the middle of a considerable rivalry with engineers. As it was impossible to oppose the rulings coming from Madrid, his opponents instead tried to discredit him ideologically and intellectually.

Leading architects such as Domènech i Montaner (designer of the city’s celebrated Palau de la Música) and Josep Puig i Cadafalch slashed and patronised the streets’ excessive width, the monotony of the grid, and the sameness of the “communist phalanstery-like squares”.

“He has been nibbling at and turning all the gardens … and spaces destined to public buildings into the monotony of an American city, destined for a pretentious tribe without more aspirations than the agglomeration of houses to eat, drink and sleep,” wrote Cadafalch.

But if Barcelona’s rival architects turned their back on Cerdà, the bourgeoisie didn’t – at least not all of it. Some members were the first to benefit (and pay for) his new district, wherein affluent families experimented and commissioned architects such as Antoni Gaudí to design their homes, turning them into beautiful, organic structures that evoked nature.

With this explosion of modernism, an unspoken urban competitiveness emerged. According to Permanyer, property owners and architects alike wanted to build “the biggest, tallest, most attractive house. This is why there’s such a rich diversity in architecture in the district – one that matches the anarchist touch of the local bourgeoisie”.

This drive to be different is illustrated by an anecdote Salvador Dalí once told Permanyer. According to the artist, when asked how he wanted his house, a member of the bourgeoisie said: “I’m only asking for one thing: for it to be taller than my neighbour’s, so that I can piss on it!”

Cerdà’s plan, though, was a “liberation for everyone”, according to Permanyer. The engineer was a utopian socialist – and at the centre of his urbanism was a deep sense of equality and a populist ideology.

He had created a neighbourhood without class divisions where, both for ideological and public health reasons, the population would be spread out equally, and there wouldn’t be exclusive areas for the rich or poor. Over the following decades, Eixample grew with magnificent modernist buildings standing cheek by jowl with artisan homes demanding much cheaper rents.

Related: Story of cities #12: Haussmann rips up Paris – and divides France to this day

Ramon Casas, a painter who had grown up in a shadowy house in the old town, was one of the modernist artists who moved to this new district, and could often be seen strolling or riding a bike on its streets with fellow cultural figures. His palette changed with the new luminosity that Eixample balconies let in – showing, with art, how a whole city was ready to look, and step, outside.

Barely cited in any urbanism books not written in Spanish or Catalan to this day, Cerdà finally began attracting praise from his compatriots, and even internationally, in the 1980s and 90s, when Catalan architects started revising history and recognising him – something that became “official” when the city hosted the 1992 Olympics.

These days, Barcelona is consistently praised as an urban success story. And its fortunes are inextricably linked to Cerdà’s work, which propelled it, in the words of Permanyer, “from a provincial town where it was difficult to live, to a truly modern city”.

Does your city have a little-known story that made a major impact on its development? Please share it in the comments below or on Twitter using #storyofcities