The older you get, the lonelier you become
Skip to content

Leonard Cohen is back on Hydra. The Canadian poet/songwriter returned to his home on the island after almost a decade. His presence is familiar to the islanders. Everyone has a story to tell about Cohen from back in the 60s. Some still remember his groups of friends or even him strumming his guitar at home and writing some of the songs that later would become so famous.

I met him accidentally one Saturday morning on the seafront as he was drinking his coffee. He wore brown Bermuda shorts and a dark shirt. His hair has gone gray. His reaction – straightforward and calm – to an unknown journalist who ran into him by chance, recognized him and wanted to ask a barrage os questions about his life, clearly illustrates that years of practicing Zen Buddhism has had its effect.

In the afternoon he had chosen to drink his coffee alone at one of the island’s central cafes with a perfect view over the bay. The shirt this time was white. We had already been introduced earlier in the day, so this time I asked if I could sit with him and talk a bit. He said yes. During our discussion he skilfully avoided answering any personal questions, trying, instead, to turn the conversation to Hydra’s beautiful sunset.«I really like this special time of day, when people are starting to wind down,» he said in his distinctively low voice.

After a while he asked to learn more about the rest of Greece. «I found myself here by chance, back in the early 60s,» he said.

When I told him that many people believe that his deep, expressive voice is a divine gift he smiled: «That’s because I don’t know how to sing.»

Leonard Cohen has two children, a son and a daughter. The former is also pursuing a career in music. What does he think of that? «It was his own choice,» he said, showing support. «HE decides,» he added, pointing to the heavens. He later admitted that all parents live for their children.

That same night there was an event taking place on the island in honor of the Greek filmmaker Theo Angelopoulos. I asked Cohen if he had ever seen any of his films. «Unfortunately not yet,» he replied, asking: «Are everyday Greek people interested in his films the same as intellectuals are?»

When our conversation came to big cities he expressed his love for New York. He refused to say anything about his training as a Buddhist monk but when we talked about his house on the island he seemed to relax. He showed me a piece of paper with the Greek word for «sink» and a phone number written on it. «My house is getting old now and needs repairs,» he said, laughing.

Before we shook hands goodbye I asked him to write down a few words to remember our meeting: «It was very good to meet you. I wish you well,» he wrote, and then suddenly said: «It is nice to be young.» «And what about growing old?» I asked him. «That’s also nice. Life is nice,» he replied.

The last thing I read about Leonard Cohen was in a British newspaper. It said that he was living at a Zen retreat, six thousand feet above sea level, in the mountains of Los Angeles, learning under Japanese Zen Master Joshu Sasaki. «The older you get, the lonelier you become and the deeper the love that you need,» he told the British journalist. There was also an exotic picture of him, dressed in a monk’s robe with his head shaved.

On the first day that I had arrived on Hydra and sat at a cafe I was told that «Cohen is also here this summer.» It was said in such a relaxed way, as though referring to the return of a migratory bird or of a friend. 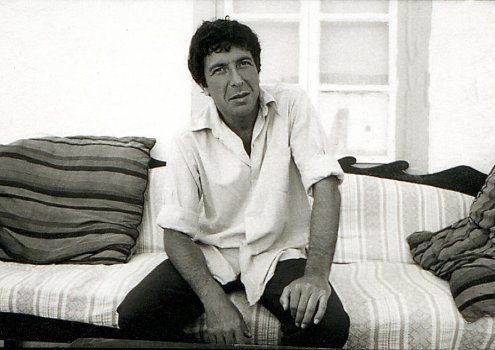