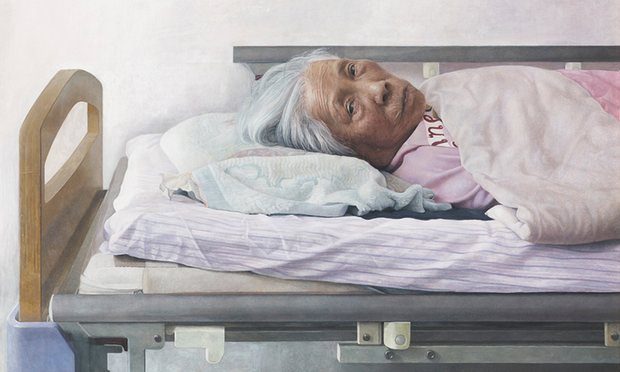 A haunting portrait by a Chinese artist of his grandmother lying in her hospital bed in the last stages of cancer, almost beyond speech but gazing at the artist and the viewer, has made the shortlist of three for the National Portrait Gallery’s (NPG) annual prize.

While two of the three artists, Clara Drummond and Benjamin Sullivan, are competition veterans who have made the shortlist at last after many appearances in the annual exhibitions, Bo Wang has made the shortlist – chosen this year from 2,557 portraits submitted from 80 countries – on his first attempt. He is only the second Chinese artist to do so.

Bo, 34, is a lecturer at Suzhou University in Jiangsu, and has exhibited at venues throughout China, including the National Art Museum in Beijing. His portrait, Silence, was made just a month before his grandmother died.

“Sometimes she tilted her head and looked at me,” he said. “There was too much emotion in her eyes to be expressed in words. I almost forgot about painting techniques or any specific style, just trying to use my brushes to communicate silently with my grandma. I can strongly feel the state of a dying life when I think of her eyes.”

The two other artists are British, and well known to visitors to the gallery’s annual exhibitions.

Drummond, born in Edinburgh in 1977 and now based in Cambridgeshire, made the exhibition in 2005 with a portrait of the actor Ben Whishaw, a friend of hers, and in 2009 with a portrait of the model Iris Palmer. Making the shortlist is the third time lucky for her portraits of her friend and fellow artist Kirsty Buchanan, depicted wearing a vintage Liberty dress in a William Morris print – she also exhibited portraits of Buchanan in 2013 and 2014.

Benjamin Sullivan, born in Grimsby in 1977, completes the shortlist with a portrait of the poet Hugo Williams, whose work he greatly admires. Despite Williams’s rather glum expression, it was painted at the poet’s Islington home in north London while listening, Sullivan said, to “very loud Elvis and early Cajun music”. Sullivan has been selected for the exhibition on 12 previous occasions, and his portrait of the astrophysicist Prof Martin Rees is in the gallery’s permanent collection.

The new director of the NPG, Nicholas Cullinan, became chair of the judges for the first time this year, and said it was wonderful to see such an international list of entries. “The final selection for the exhibition, including this shortlist, brings together some really striking examples of the contemporary portrait,” he said.

The winner will be announced on 21 June, and the exhibition, which this year includes 53 artists from Britain, the US, Germany, France, Ireland, Spain, China, Russia, New Zealand, South Africa, Lithuania and Colombia, opens to the public on 23 June.

The prize, now the largest in the world for portraits, is sponsored by BP, which has recently announced it was dropping its sponsorship of the Tate and of the Edinburgh Festival, and is reviewing its sponsorship portfolio – which has led in recent years to pickets by environmental campaigners on the institutions. A spokesman for the NPG said the portrait prize sponsorship was guaranteed until the end of 2017. “We are currently in discussion with BP about a potential future partnership beyond our current contract,” he said.

The BP Portrait Award 2016 exhibition is at the National Portrait Gallery in London from 23 June to 4 September 2016, with free entry. It will then tour to Lincoln, Edinburgh and Leicester.