Peacock and Vine by AS Byatt review
Skip to content 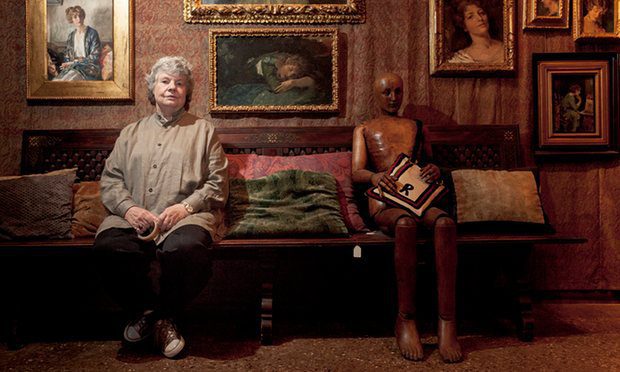 This article titled “Peacock and Vine by AS Byatt review – Mariano Fortuny and William Morris, masters of design” was written by Fiona MacCarthy, for The Guardian on Friday 1st July 2016 08.00 UTC

All admirers of AS Byatt’s writing are aware of her profound intellectual awareness of the visual coexisting with an almost childlike delight in the colours and tactilities of everyday life. Think back to the beginning of the great quartet of novels that feature Frederica Potter. The first of these, The Virgin in the Garden, opens with that glittering and sensuous 1960s party set in the National Portrait Gallery. Byatt’s short stories, like her novels, invent narratives in which art is of the essence. The Matisse Stories especially come to mind.

These lifelong passions come together in the summer of Byatt’s 80th birthday in a shimmering new book in which she links two of her heroes, the stalwart William Morris and the more theatrical Mariano Fortuny, both of whom created individual, unexpected works of art for their own times.

The idea for the book started for Byatt with an unexpected sighting of William Morris’s ghost in the Museo Fortuny in Venice. She describes how, in the tenebrous interlocking chambers of the Palazzo Pesaro Orfei, where Fortuny lived and worked, she was suddenly aware of William Morris’s presence, “his clear colours, his northern myths as opposed to Fortuny’s gold and sandy and shadowy colours”. When she got back to England she saw how she was using Morris to understand Fortuny and using Fortuny to reimagine Morris. How contrasted they were, the Spanish aristocrat and the conscience-stricken son of the British bourgeoisie, and yet as designers they have wonderfully interesting similarities.

As Byatt came to see it, both were men of genius and extraordinary energy: “They created their own surroundings, changed the visual world around them, studied the forms of the past and made them part of new forms.” In a fascinating early chapter she explores the two distinctive worlds the designer-artists both created, one in England, one in Venice, through the images of the women who themselves were integral to the scenario: Jane Morris, “melancholy, malcontent, beautiful”, in the loose artistic dresses that prefigure a Fortuny; Fortuny’s own wife, Henriette, also his working partner, another strikingly elegant woman, as painted, drawn and photographed by Fortuny repeatedly. Byatt finds Jane Morris mystifying and alarming. Dante Gabriel Rossetti’s portraits of Jane have a terrible excessiveness. She concludes that Fortuny in his “glittering cavern” in the Venetian backstreets had a happier domestic life than Morris did at Kelmscott.

“As I grow older,” Byatt tells us, “I become more and more interested in craftsmen – glass blowers, potters, makers of textiles.” She reminds us that her own ancestors were workers in the English industrial pottery towns – the so-called Five Towns in Staffordshire. There is a sense in which this book is Byatt’s late-life meditation on the processes of making, the perfecting of the object, a subject that has been a recurring motif, even an obsession. In recent years she has written inspired commentaries on contemporary ceramics artist Edmund de Waal. In The Children’s Book, my favourite of her recent works, Morris himself makes a personal appearance and his spirit and influence dominates a narrative set in the Edwardian latter days of Arts and Crafts idealism.

An almost frenzied inventiveness links Morris to Fortuny. Both their lives were dominated by the project of the moment. Creative imperatives merged with domesticity. Byatt points to the episode in which Morris, determined to master the techniques of hand weaving, erected a loom in his bedroom, rising early to make the most of daylight hours. Just as Morris in 19th-century England taught himself successively stone and wood carving, embroidery, wood engraving, calligraphy and illuminating, Fortuny in Venice in the early 20th century was experimenting with specialist tools and machinery, designing table lamps and furniture. He was a pioneer of photography, taking out a patent for a new variety of photographic paper, an activity that links him directly with Morris’s own experiments in paper-making. Fortuny’s most formidable invention was of a bowl-shaped portable theatre. He patented a system of reflected light for the stage.

There was scope and ambitiousness in all these projects. Fortuny’s workshops within the palazzo were gradually expanded to the point at which more than a hundred specialist workers occupied the second floor, producing his beautiful elaborate silk and velvet fabrics and making the fluidly structured clothes that he designed. It was an enterprise on the same scale as Morris’s works at Merton Abbey, the seven-acre site in south London where he had his workshops from 1881 – who gradually becoming self-sufficient in textile dyeing, weaving, fabric printing and stained glass. Both expanded their businesses into a succession of retail outlets. Both exploited their brand names. “Fortuny” and “Morris & Co” were names to conjure with among the cognoscenti.

Byatt writes evocatively on the differences between them, beginning with the physical contrasts between small and thick-set Morris, appearing so “squat, fat, urgent and ridiculous” in Burne-Jones’ and Rossetti’s malicious cartoons, and the tall, dark, romantic, bearded figure of Fortuny in his flowing robes and turban looking like a magician from The Arabian Nights. Where Morris was the man of the north, spiritually linked to ice floes  and volcanoes and the grim heroics of the Icelandic sagas, Fortuny was a southerner, who recreated Greek myths and legends in early 20th century modernist terms. In 1906 he read Arthur Evans’s book on The Prehistoric Tombs of Knossos. Fortuny’s first Knossos scarf appeared just a year later. He photographed Henriette wrapped up in one. Fortuny’s famous Delphos dresses followed, near-transparent and undulating silken body sheaths composed of hundreds of permanent pleats. Byatt denies that a Knossos dress is sexy but I am not convinced.

The textile arts of course are the great meeting point between Morris and Fortuny. Both understood so well the role of textiles in transforming the interior of a building into a Gesamtkunstwerk, the Wagnerian concept of all elements combining to create a total work of art. Both viewed textiles not in obvious terms of colour and tactility but sought out some inner meaning in what has always been a truly democratic art. Both kept overflowing treasure chests of historic fabric samples. I was reminded that Morris’s coffin, as it travelled in a wagon along the muddy lanes to his funeral at Kelmscott, was draped with his most precious fragment of Broussa brocade.

This is a small book but, in its enchanting way, it brings together so many of the themes of Byatt’s larger and more obviously ambitious works. “I like looking at colours,” she tells us. “It is always surprising how people don’t really look at things.” How right she is. Through concentrating on the interlocking worlds of Morris and Fortuny she makes a great defence of the values of art.